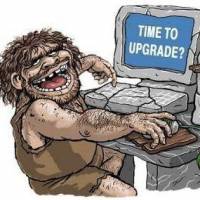 It was ten years ago this month that the Old Gits Having Fun was born, the reason for the creation was to provide a place where both myself and my son (Dedly) could enjoy what was obviously an interest that he had and that I would not be able to stop. So to manage his interest I thought the right thing to do as...

It was ten years ago this month that the Old Gits Having Fun was born, the reason for the creation was to provide a place where both myself and my son (Dedly) could enjoy what was obviously an interest that he had and that I would not be able to stop. So to manage his interest I thought the right thing to do as a parent was to be there to guide him through his early steps into the world of online gaming.

The game that had just been released at the time was Call of Duty:World at War so it seemed the right thing to do to setup servers and try to attract players. I setup two servers a TDM and DM, over a few weeks they started to fill and we played them as they were. Soon it became apparent that many people had some very broad views on what was acceptable in the world of online gaming. As a parent and a person with certain views on life I found this unacceptable so I started looking into ways to apply a rule set throughout the day even if I was not their to admin the server using Rcon tools.

The first remote admin tool I used was called Manuadmin. This was a tool that allowed rule-sets for swearing and also penalties for weapon use if it was on the banned list. However as the servers became more popular it struggled to deal with the volume and therefore our journey with the B3 began.

Once the servers became popular more and more in the chat were requests for our website address, so I decided the site should be born. The website came on-line at the end of January 2009 and started in a very basic form, but soon had ultrastats added to it this stat application was actual promoted during the early days of WAW. The adding of the stats increased the involvement of the players with the site and I then started accepting applications to wear tags.

After the success of the World at War servers I then added Call of Duty:Modern Warfare servers to our server lists. Our early servers were hosted by a number of providers but it all started with GTXGaming. The servers were hosted this way for the first year or so but it soon started to cause restrictions particularly in the way in which the admin tools could be applied. So I then decided to acquire a dedicated server that was held in the Poundhost datacentre. Our voice server in those days was Ventrilo and provided by Rackspace. Baggins funded this for us and was our initial sound engineer.

We then grew and grew as a community adding games to our list as they were released and interest in them was shown. Through out this growth many members came and went but a number choose to hang around the mad house. To name everyone would be a huge task, and I am not sure if they would want to be named. So I will list what they enabled for the clan and with these elements we would not be what we are today. But before I do that there is one I will mention because I know for a fact how he felt about us. That is a gentleman who went by the name of Haggis. I never met this individual in person but he was a true friend to both myself and many others. He understood what I was trying to create with the OGHF and stuck with a never weakening determination to ensure that all members walked the path of the "Old Git". I will never forget him and will always have a fond place in my heart for him.

Elements that have been contributed and some are still being today are:-

A huge commitment by the Admin team to keep our servers a clean,fun and fair place to play.

Support during our years with Homefront,BF3 and BF4 Servers to both admin and provide B3 Hosting support.

A council that keeps the approach consistent

Support with the management of our first generation of the Teamspeak server (Can I have a Token again....)

A core of donators who have helped keep the financial burden to a minimum, a couple of which who have consistently contributed for many years.

The above is not all of the contributions, but to list them all would be huge and I wish to thank everyone who has helped the OGHF achieve 10 years.

What are doing to mark this event then? well there are 4 new servers that I have created, they are as follows:-

This has been created for a couple of reasons firstly Haggis loved this game and secondly it is a memory of a time when I felt that we had achieved something within the clan community. Many years ago I was approached by a player with the nick "Oneal" (I am sure that is correct) his clan BC was starting to reach a point where their numbers were dropping and asked if we could merge. We did, I think the last remaining member we have from that time is "Pheel".

This marked the first successful "Frostbite" based game for the OGHF and it allowed for many fun evenings. We hosted many frostbite games and had many members join use for that reason. One of which we sadly lost whilst he was enjoying one of his other passions "Gandalf".

Yes I know we host a server for this and it is very successful, but this will be the vanilla variant as hosted back in 2008. So that means no custom maps, no Mad, tanks will be rolling about and the dogs will be let out. There will be a 24/7 map as well.

As above I know we host one already, but vanilla again, no custom maps, no mod, GL's and all perks are back and the chopper will kill you. Again a 24/7 map will be applied.

The above servers will all be password protect and can be used by all website members. I say website members as it will not be restricted to tag wearers, anyone registered on the site will be able to see the password. Also any TAG wearer can invite whoever they like. These servers will not have bot intervention.

Hi Folks..... I have a quiet weekend coming up so I will be finishing off the server moves and sorting some of the rough edges. So there will be  a few server restarts this weekend. Sorry but it is unavoidable during the process...

/* Wrapper for page content to push down footer */
#wrap

/* Set the fixed height of the footer here */
#footer